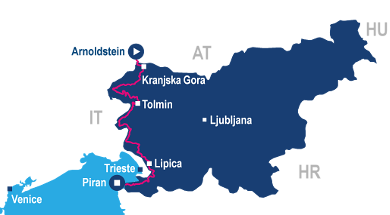 The Trans Slovenia 01 mountain bike tour offers supreme biking in Slovenia’s most beautiful regions, pedaling from the Julian Alps all the way to the Adriatic Sea in only 7 days. Unknown trails, diverse landscape and warm hospitality provide for an unforgettable MTB experience. Traveling from the mountains to the Mediterranean has never been so exciting.

The tour starts in Arnoldstein, a charming little town just across the Austrian border. An uphill ride to Mt. Peč is rewarded by a thrilling descent to Kranjska Gora, an Alpine resort known for skiing competitions. Before catching the sight of one of the most beautiful rivers in Europe, the Soča river, another mountain biking challenge awaits – the Vršič mountain pass. Leaving the Soča Valley behind, the trail then leaves the mountains and continues towards Goriška Brda, a region famous for high-quality wine and delicious home-made food. The last part of the tour offers excellent biking through the remote karst area, before the trail descents towards the coastal town of Piran, a small slice of Venice in Slovenia.

The Trans Slovenia 01 mountain biking tour is suitable for all levels. Its many variations cater to all tastes – on gravel or trail, from easy to difficult. This MTB tour will make you fall in love with biking in Slovenia and beyond – it is a part of the 2000 km long Trans Dinarica tour connecting balkan countries.

The Trans Slovenia 01 mountain bike tour starts with the arrival to the Alpine town of Arnoldstein situated at Austria’s southern border between the Carnic Alps and the Karavanke mountain range. Meeting in Arnoldstein is followed by a warm-up uphill ride to Mt. Peč and a thrilling descent to Kranjska Gora.

The first MTB day is all about the triple border (Dreiländereck), where the territories of Slovenia, Italy and Austria come together in a single point. The peak offers a spectacular view over the Julian Alps, the Gailtal Alps, the Gurktal Alps, the High and Low Tauern, and the western part of the Karavanke mountains. Various detours are taken to reach the peaks offering majestic views and tones of biking pleasures are guaranteed.

From Kranjska Gora, the Trans Slovenia 01 mountain bike tour leads past Lake Jasna to the Vršič mountain pass. The highest positioned road pass in the Eastern Julian Alps with an altitude of 1611 meters offers one of the best ascents in the region. For the most part, the tour avoids the main road and makes use of the gravel trails.

The downhill part of the Vršič pass leads to the Trenta Valley, one of the most remote, but also most alluring places in Slovenia, located at the heart of the Triglav National Park. It is also the uppermost part of the famous Soča Valley, the first place in Slovenia to be proclaimed the European Destination of Excellence due to its sustainable tourism development.

Flowing under the majestic peaks of the Julian Alps, the emerald green Soča is considered as one of the most beautiful European rivers. In addition to a plethora of stunning natural sites, the valley features the shocking heritage of World War I, which is visible at every step. The MTB trail follows the river to the small town of Bovec, known as the center of outdoor sports. The rest of the day is dedicated to exploring this idyllic location or choosing from a wide variety of outdoor activities provided by the local agencies. A zipline session or river kayaking/rafting are highly recommended.

The third day of Trans Slovenia 01 mountain bike tour begins at the majestic Boka, the mightiest waterfall in the country. After a short ascent at Žaga village, a concrete road leads up to the border between Slovenia and Italy. From here, a former mule-track road leads to the top of Mt. Stol. Upon reaching its highest point, an incredible view of the Alps and the Soča Valley opens bellow. On clear days, the peak also offers a splendid view of the sea. Mountain biking along the ridge of Mt. Stol is surely the highlight of the day. A steep single trail then leads into the forest, descending right to the banks of the Soča river in Trnovo village. MTB enjoyment is assured.

Only a few kilometers of a winding road along the river remains before reaching the small town of Kobarid, best known for the 1917 WWI Battle of Caporetto, where the Italian retreat was documented by Ernest Hemingway in his novel A Farewell to Arms. Today, Kobarid is a lively tourist hub.

Ready to unlock the next level? The uphill ride from Kobarid to Krn   then onto the Pretovč mountain pasture makes this part of the Trans Slovenia 01 mountain bike tour the most demanding one. However, what goes up must also come down. The effort is rewarded with an exciting descent towards the valley of the Tolminka river, passing by the Memorial Church of the Holy Spirit, a monument dedicated to the First World War. Here, the MTB tour comes close to the lowest point of the Triglav National Park and one of the most popular tourist spots in the region, the Tolmin gorges. Those who have energy to spare can opt to visit this beautiful site before starting to bike above the Tolminka river to the town of Tolmin.

The stunning two-hour descent from Mt. Matajur is definitely one of the highlights of the Trans Slovenia 01 mountain bike tour. And yet again, whoever goes down must first bike up, all the way to the top of the hill at the Slovenian border with Italy (1642 m). The MTB trail offers fantastic views over the Friulian plains and the surrounding mountains. What follows is pure fun – an amazing downhill ride through the woods to the tiny historic town of Cividale del Friuli in Italy, where a stop for some delicious Italian gelato or pizza is strongly recommended.

Leaving the Alps behind, it is time for some easy biking through the vineyards of Collio in Italy, eventually arriving to the village of Šmartno in the region of Goriška Brda. The land of gentle, rolling hills covered in orchards and vineyards and dotted with small, secluded villages, reminds of Tuscany. The wine growers here are famous all over the world for their high-quality wine and hospitality. A wine connoisseur would recognize many of the winegrower names signposted along the road. Needless to say, wine tasting is inevitable here and as far as food is concerned – well, the hills overlook Italy. Enough said.

The longest biking day of the Trans Slovenia 01 mountain bike tour is all about Karst. Did you know that Slovenia is the land of karst? New caves are discovered in Slovenia every year, and the number of recorded ones now amounts to more than 8.000 with only about 20 of them open for public. The Slovenian Karst is also a wine-growing region, which was already praised by the ancient Greeks and Romans. The Karst Wine Route indeed boasts over 100 wine cellars.

Although the landscape is different here, it is again full of vineyards and small villages located on the hill tops and featuring traditional houses built in stone. The MTB adventure of the day comes to an end near Lipica. Did you know that the noble white Lipizzaner horses originate from Slovenia? Their original stud farm has been located in Lipica since 1580.

The last biking day truly wraps up the diversity of Slovenia and of the Trans Slovenia 01 mountain bike tour itself. The route first leads up to a popular local hill, finally reaching the medieval Socerb castle, which overlooks the Gulf of Trieste. A steep descent leads to the Osp Valley, passing through the karst and the coastal region of Istria. Osp is one of the oldest villages in Slovenia, being first mentioned in 1067. It is well known for its rock walls, which provide free climbing opportunities all year long.

The trail then descends to the sea level, approaching the city of Koper, situated at the Slovenia’s 47-kilometer coastline. From there, it follows the Parenzana railway track, a now defunct narrow gauge railway that connected Triste and Poreč in the beginning of the 20thcentury. Following the Parenzana and passing through some tunnels on the way, the road ultimately leads to the city of Piran, which, according to Lonely Planet, is a small slice of Venice in Slovenia. Its old town, full of Venetian Gothic architecture, is known as one of the best-preserved historical towns on the Adriatic. The MTB tour ends here, but not before trying some delicious seafood and taking a dip in the Adriatic Sea.

The Trans Slovenia 01 mountain bike tour ends with breakfast in Piran. After breakfast, a transfer is organized to the tour starting point in Arnoldstein.

*In season, tour can be organised on any date. Please contact us for individual offer.

Rates per person are based on double occupancy.

The price of a self-guided tour depends on the number of people in the group. Please contact us for the offer.

Are you worried you are not prepared enough physically? Would you like to select a different starting or ending point, or perhaps have a day off before, after or during the tour?

The adventure starts at the Alpine town of Arnoldstein and ends in the town of Piran on the Slovenian coast.

Ljubljana international airport is located within a 50-minute driving distance from Kranjska Gora and about an hour from Arnoldstein. There are several other international airports in the area, those of Venice, Trieste, Klagenfurt, Treviso, Graz and Zagreb, each of them within a maximum of 2-3 hour driving distance. We are happy to arrange airport shuttles from any of these airports upon request.

If you are traveling by car, parking is possible at the tour starting point.

Our tours are mostly operated through small towns and villages. We always make effort to select the most authentic and visitor-friendly accommodation and dining arrangements available. This way the tour groups can enjoy local hospitality and great food on the entire route.